Catherine's jewellery collection includes limited edition luxurious engagement and wedding rings, cocktail rings, necklaces, luscious earrings and bracelets handcrafted in recycled sterling silver, 18ct gold and 22ct gold enhanced by luscious gemstones and shimmering pearls. The jewels showcase individuality and are characterised by their timeless chic and elegance, with a hint of French playfulness. The lines are fluid and organic adorned with textures which embody life's stories of love and passion.

Catherine also loves to work on bespoke designs commissions as she enjoys the challenge of making your unique dream come to life. Remodelling old jewellery is also quite fun. Get in touch for yours.

Deliveries take 5-10 working days at present for items in stock, and 2 to 8 weeks for custom bespoke commissions depending on model and workload.
Do allow plenty of time for your wedding or a special present. 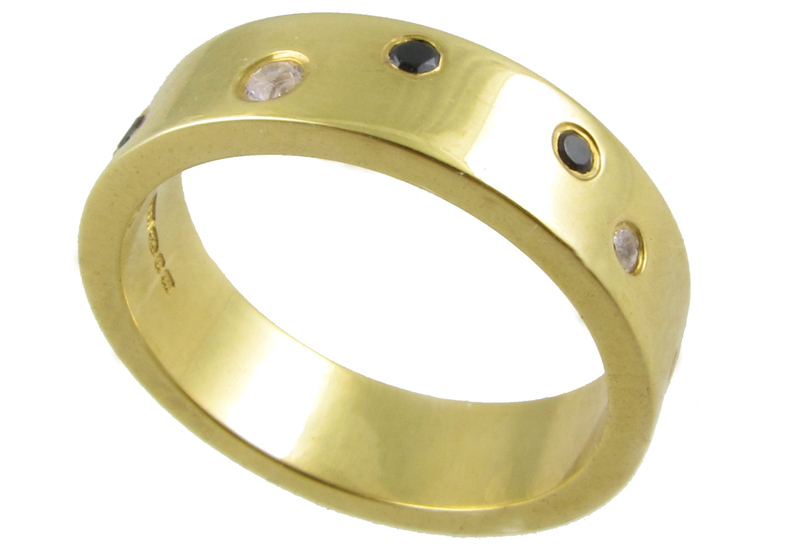 A yellow gold and diamond ring by jewellery designer Catherine Marche has raised £4,000 for charity, after it was auctioned at the BAFTA première of the latest James Bond movie, Skyfall.

Marche’s ring was part of an auction held on October 24 to raise money for MediCinema, a charity that aims to bring the cinema experience to those in hospitals or places of care.

The Night and Day ring is made in 18ct yellow gold and set with black and white diamonds to represent “two souls with two kinds of gemstones”.

The ring finally went under the hammer at £4,000, after a bidding war had ensued for the piece.

Catherine Marche said she was absolutely delighted with the result and the money raised.